Tonight I was planning to post my first bookish discussion of the year but something bad happened a couple hours ago. My cat just got hit by a car and died and I’m in a very, very sad mood right now 😦

I didn’t know how old my cat was. We didn’t have her since she was little. She was actually a stray cat that used to wander around our neighborhood. One day my little brother started to feed her and just like that, she became a part of our family. We never keep her in cage but she just knew to come back to our place every now and then. You might remember that on my November recap I posted a picture of my cat giving birth to five kittens? Well, now the mother is gone.

I was just hanging in my room, picking clothes for the night when suddenly I heard my cat screamed. Or cried. Or both. I yelled at my brother and told him to check it while I changed. My brother yelled back and told me the cat was hit by a car. I dressed as quickly as I could and ran outside… and there she was, lying on the street, on the verge of death. It was so, so horrible and I didn’t want to get too close because I was scared. I ran back inside and grabbed my phone to call my cousin. She’s a vet so I thought maybe we could take her to the hospital. But then my dad told me it was too late because she was already gone.

Before I ran inside, I saw the car that hit her. It was a red picanto, my neighbor’s car. He didn’t even stop. He just kept driving. My dad asked me if I was sure it was our neighbor, because it seemed very unlikely for a neighbor to hit another neighbor’s cat and just left. I was very, very sure because he’s the only one who owns that car in our neighborhood.

A few minutes later he came back while my dad was going to bury the cat. I later found out that one of my neighbor chased after him to tell him that he’s killed a cat. As soon as he got out of the car, I yelled at him, and you know what he did? He laughed. He fucking laughed. I just… I can’t even. The cat was dying in there, my dad was trying to bury her, and I was crying, and he played it off like it was no big deal. He didn’t even say sorry. What a heartless jerk.

I was too pissed to deal with him so I just went inside and cried in my room. Later my dad told me that this neighbor said he didn’t see the cat. And he didn’t feel it, he thought he ran through some plants and he didn’t hear it when she cried or when my other neighbors yelled at him. I called bullshit. I drive all the time so I know. If he’s been driving carefully, he would’ve seen the cat. And I knew he must’ve felt it. I feel it whenever I so much as ran through a rock.

After I got enough crying, I went back outside. The cat was already buried and there were a few people talking in front of my house. Turned out they were there when it happened. And here’s what happened.

Skip until the flower icon if you’re not comfortable reading about animal dying.

The cat was hungry, she was meowing at us, begging us to give her food. We ran out of food and there was only the food for the kittens. She didn’t like it. I was mad at my family because none of them cared enough to buy foods, so my dad ended up giving her some leftover fish. She took the fish to the street and ate there while breastfeeding one of her child. That was when the car showed up. Some of the people who were there said she was busy eating but didn’t move, so they yelled at the driver to tell him to stop but he kept driving. Some little kids said the cat got dragged for about 30cm by the car and she was bleeding so heavily. It was horrible and I cried instantly. I couldn’t even look too closely because it was tragic 😦

Now I have three orphaned kittens. They’re old enough to survive on their own but it must be different because up until last night the still slept together. All of them. I feel like crap now because I keep thinking about things that would never happen again. Like now she wouldn’t steal our food anymore. She wouldn’t perch on my bedroom window when we close the front door anymore. She wouldn’t annoy us anymore and that is just so, so sad </3

I was never really a pet person, but I felt really close to this cat because I was practically the only one who took care of her. I mean, my family was busy with school and work and since I was free I used to take care of her and feed her and all that. Like every time I ate I always gave the leftover meat to her. Now she’s gone and I felt more heartbroken than I ever expected. You know, I would be okay if it was an accident. I know no sane person would intentionally kill a cat. But him laughing about it and not saying sorry just completely pissed me off and from now on I’m just gonna be hostile every time I see him. I hold grudges.

Anyway, here are some pictures to remember her by ♥ 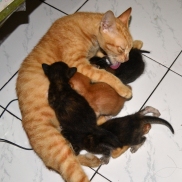 Taking care of the kittens 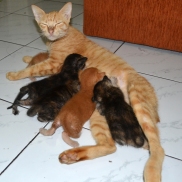 Squinting her eyes because I used flash 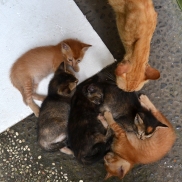 Randomly checking up on her sleeping babies 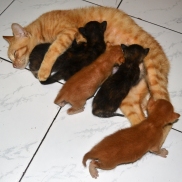 The last picture I took yesterday. They were cuddling </3

Have you ever lost a pet? What did you do to deal with it? Because right now I keep thinking about my dead cat and I can’t stop crying 😦 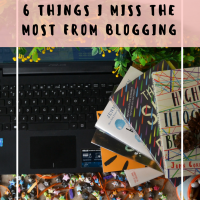 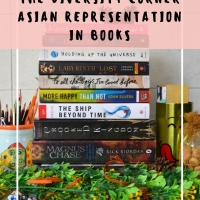