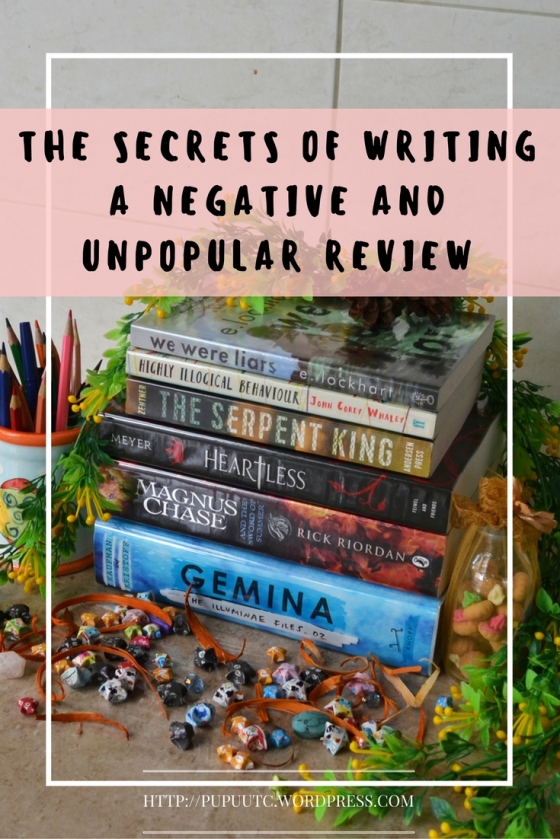 A couple months ago I wrote a post about the joy and struggle of reviewing books in general. Today I’m back with another review-related post, only this time I’m going to focus on negative reviews.

I don’t know about you, but for me it’s bad enough to have to write a negative review. Let alone having to write a negative review among the sea of positive ones. I want to enjoy the books as much as everybody does and believe it or not, I don’t want to be that one person who bursts the bubble. Unfortunately, we feel what we feel and some things just had to be said 😛 I had a lot of conversations with fellow bookworms regarding negative reviews and most of us are afraid of it because the internet is a scary place where everyone gets offended all the time.

So the question is…

What is the best way to write a negative and unpopular review?

To tell you the truth, I’m probably not the best person to give you advice about it because most of the times, I’m still worried about my own negative reviews. But after reading and writing reviews for over 5 years, I learned a lot about reviewing. As always, everything I’m going to say in this post is based on my own experience 🙂

Before we answer the question, let’s address the fear itself. A lot of people are so afraid of putting their opinions out there because they’re afraid of offending someone. Well… we shouldn’t be. Here’s why.

A lot of reviewers are comfortable enough to talk about about a book bluntly, but I’m not one of them. Not that there’s anything wrong with them, it just isn’t me.

When it comes to negative and different opinions, I’m not that confident. Sometimes I sugarcoat my opinions just to soften the blow :’) I also don’t like trash talking a book or an author or really anything. Books take time and commitment to write, so trash talking them might not be the best option for me. I mean, authors pour everything they have into their writing, it’s their brain-child, so we should always appreciate it. The case is probably different with problematic books that contain things like racism and such, but I personally haven’t met books that anger me like that, most books just annoy me.

So, this will focus on negative reviews of books you simply don’t like 😉 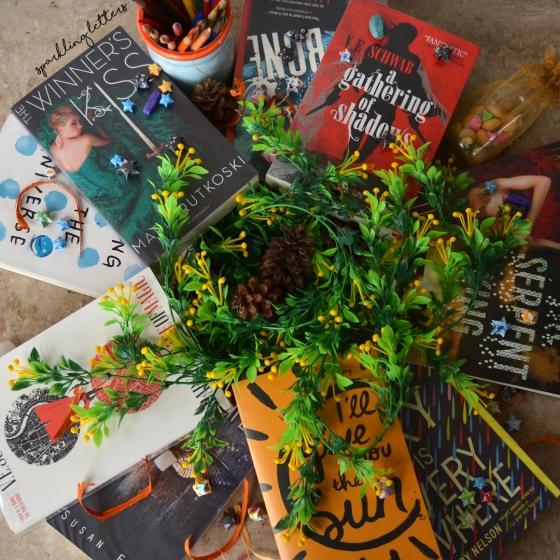 1) Be polite and respectful. I always try to write my critics as politely as possible, though I admit sometimes it’s hard because some books just annoy me to no end and all I wanna do is rant >_< Buuuut if you do it politely, you probably won’t offend and/or hurt the author and other people who like the book that much. If you’re being reasonable, chances are people will too.

2) Be sassy. Or funny. Or even better, both. I’m sure you all have read a lot of sassy negative reviews on the blog and goodreads and you know what, I prefer those kinds of reviews to the hateful ones. Reading something full of hate and anger is exhausting. Also, the chance of offending anyone when you’re being sassy is considerable lower. I mean, have you read sassy reviews of Fifty Shades or Twilight?! Those are super funny! And even I enjoy sassy negative reviews of books I love 😛 Also sometimes I specifically seek out negative reviews by my favorite reviewers just to have a good laugh… I know it’s not nice to laugh over someone’s masterpiece, but still… :’)

Unless of course, if the book is so problematic and sends a super wrong message, people have the right to call it out and be angry. But don’t overdo it because no one likes people who are always angry.

3) Balance the negativity with something positive. Let’s take a second to be objective and forget your extreme dislike for the book. There’s usually always something at least remotely positive you can comment on. It could be the idea, the side characters, the character’s hobby, the chapter title? If you can’t find any then the book is probably just that bad.

4) If you’re not sure of your opinion because everyone else seems to love the books (like me), looking for other negative and unpopular reviews might help. At least that’s what I usually do after I’m done writing my own review LOL it helps to know that you’re not alone. And guess what… no matter how peculiar your opinion is, there’s always at least one person who shares it. You can’t be the only person in the world (or at least in the bookish community) who thinks that way 😛

5) Rant away, edit later. Sometimes, a book is just downright bad and annoying and I just need to vent. So I do. I write everything I hate about it without any care and I tell you, it is so liberating 😛 and then I usually go back later to edit and make sure I don’t write anything too offensive that will possibly cause a backlash.

6) Last but definitely not the least, JUST OWN IT. Doesn’t matter if you’re being super honest or sugarcoating it, just own it. Like I said before, you are entitled to have opinion and whatever it is, there’s always someone who’ll be offended, so just own your opinion like a queen 😛 (or king!!!) 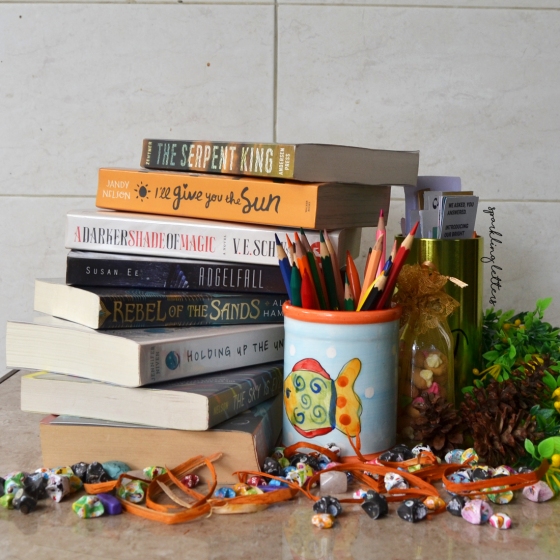 Some of my own negative & somewhat unpopular reviews :

LET’S TALK! How often do you write negative and unpopular reviews and what do you think is the best way to do it? Are you (like me) sometimes afraid of offending people and the possible backlash from the bookish community? And for you brave people who are comfortable enough to write rant reviews, what are your secrets??!! Spill them because I’d love to hear your thoughts! ♥