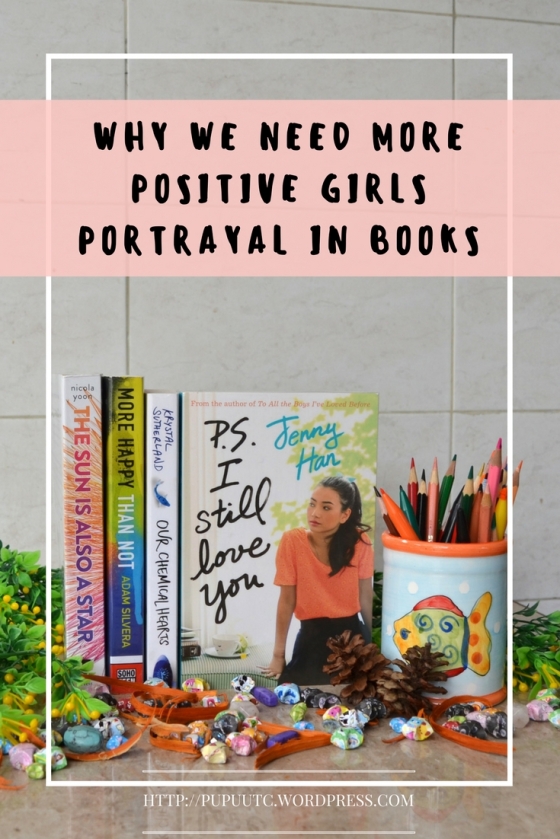 Today we’ll be talking about something that’s been on my mind for quite a while : girls representation in books. Now you may be wondering what I’m talking about because don’t we get so many representation already? Well, we do. After all, most book covers are photos of girls. But are they positive? Well, we’ll see in a bit 😛 what pushed me to actually write this post was seeing some of my twitter friends talked about the same thing. It made me realize that my opinion was valid and not just my own… you know, that other people share the same opinion with me.

If you read regularly, I’m sure you must have noticed the following characters : the calm and quiet main character who prefers her own company, the bubbly best friend who keeps trying to ‘drag her out of her shell’, and the evil, mean cheerleader who’s out there to make the protagonist life a living hell. Let me tell you something, those characters are cliche. Especially the mean girls.

I’m not saying there are no mean girls in real life because the truth is, there are. They exist. But in all my years of going to school and university, I haven’t come across a truly stereotypical mean girl who’s a tall blonde, a cheerleader, dates high school quarterback, and only cares about makeup, party, and boys.

Honestly, we should’ve left this trope in 2016 because it’s problematic! Not like other girls is usually used to describe a main character who’s again calm, quiet, nice, and doesn’t realize she’s pretty. She’s not like other girls because other girls care about their looks, wear make up, talk a lot, and flirt with boys. It’s like a girl has to be ‘less girly’ to be special and that’s like??? I mean… what’s wrong with other girls?

I don’t understand why a lot of authors have this trope in their books. In books, girl hate may take a lot of form but they exist. There’s the hate between the captain of the cheerleading team and the main character. There are girl bullies. There’s also this kind of hate where the characters seem to be friends but secretly hate each others, leading to back handed compliment or any other offensive comments.

Do you notice all the things I pointed out above? If you don’t it’s either you don’t read that much or I’ve been reading the wrong books all this time 😂

These tropes might be common, but that doesn’t mean they’re not wrong because to be perfectly honest, they are. They’re harmful. I’m not saying every girls are best friends with each others because we don’t. Girl fight exists, bullying exists, but are they as common as books portray them to be? I don’t think so. That’s why we need more positive portrayal of girls in books.

Now that we’ve talked about the negative portrayals, it’s time I tell you my reasons why we don’t need them and we need a more positive one instead.

Girls are not monolith

Take me for example. I’m a huge nerd who prefers reading to every other activities but I also love wearing makeup and dressing up. I’d rather stay home than go to a party but I also like to gossip and talk about boys with my friends. I could be friends with both girls and boys. I’m not one dimensional, and neither are my other girl friends. Back in high school, one of my best friend was a cheerleader. She likes to sing, gossip, flirt with boys, and she’s so nice we used to share a lot of secrets. She’s not mean.

This. This is why I don’t get the girl hate trope because the truth is, girls don’t hate other girls. Okay, not entirely true. I’ve hated other girls and stopped being friends with some of them but it doesn’t happen that often. Even if it does, there’s always a reason. A real one. We don’t go around hating other girls just because. Of course there are girls who bully other girls, but in my experience, they don’t go around bullying nice, quiet girls just because they exist.

Most of my best friends are girls and they are amazing. My first real friendship was formed on my first year of high school. It’s a group of 4 girls. We talked a lot about clothes, boys, other people, our problems, our family, our pasts, and basically everything. They’re my closest confidante and we still keep in touch until now, almost 8 years after we met. We were separated on our second year. We didn’t share the same class, so I formed a new friendship with some new girls. It was a big group, I’m not even sure how many of us was in that group but we were all close and we didn’t secretly hate each others.

During my time in university, I met 4 more amazing girls whom I immediately became best friend with. They’re my rock. Living away from home, from your parents, means that the only family you have is your friends and that’s what they are to me, family. I went to them with every one of my problems and they’re always there for me. I’m also friends with almost all the girls on my year. We might not be besties but we get along fine.

My point is girl friendship is amazing and we should have more of that in books!

A lot of teenage girls read books, especially YA. A lot of them look up to book characters and set them as their role models. Imagine if books only portray negative stereotypes. Those young readers might use them as examples and that’s why we need positive portrayals for them.

As usual, I’m ending my discussion with some book recommendations so today’s recs is supposed to be about positive girls portrayal. However, I’m kind of drawing blank because it’s such a broad and vague term and not a lot of books came to my mind. So, this recs is gonna be about fantastic female friendship 😛 even then, thinking up books with truly great friendship still turned out to be difficult. I mean, how sad is that?

Here are some that I managed to recall ♥

I’LL MEET YOU THERE BY HEATHER DEMETRIOS

You know I love this book so, so much and one of my favorite element is the friendship between Sky, Dylan, and Chris. Okay it’s not exactly a female friendship because Chris is a guy, but let’s just talk about Sky and Dylan here. Their friendship is amazing! Dylan always has Sky’s back and ready to defend her and from what I gathered from the story, Sky also had Dylan’s back when she went through some tough stuffs.

Lily and Isabel are definitely my friendship goal! They just get each other and I love how they handled their conflict. Dating your best friend’s ex could go wrong on so many level, but it could also be alright. I know this, I’ve seen in twice in real life, so I was happy to see how things turned out between Lily and Iz.

There are tons of reasons why Six of Crows duology is absolutely amazing and one of them is because the fantastic friendship between Inej and Nina! ♥ At first I was worried they were gonna be some kind of frenemies but turned out their friendship was so, so genuine and fun and full of talk about foods! 😛

EVERYTHING LEADS TO YOU BY NINA LACOUR

For more recommendations about female friendship, head straight to CW’s blog! She wrote a recommendation post a few months back and it was amazing! ♣

Alright everyone, those are my reasons of why we need more positive girls portrayal in books because the portrayals we do have are so stereotypical and well… not true! What do you think about it? Are you tired of seeing the ‘not like other girls’ and ‘girl hate’ tropes over and over again? What are your favorite books featuring positive female portrayals? I’d love to hear your thoughts! ♥ 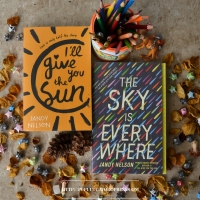